It's Been A While


Recently on Facebook, I was criticized for not knowing what cultural appropriation is. A friend had posted a side-by-side shot of Princess Leia and a Mexican soldadera, showing how Leia's two side buns had been inspired by the woman revolutionary, confirmed by Lucas years prior. A fellow commenter called it cultural appropriation, and I disagreed. Her response: you clearly don't know what cultural appropriation is. But I do. And Leia wearing the side buns which were inspired by the soldadera is not an example of it. One honors, the other exploits. It's that clear. And for this person to call it appropriation means that she would claim to know Lucas' intent, which is ludicrous because she can't know the heart of a person.

So, what's the test? How does one know it is exploitation versus a simple use of, an inspiration from, an attempt to honor, right or wrong?

I think it's easy: does the use of a hairstyle (that I've actually had a hard time finding more examples of) come across as Lucas "knowing" or "getting" what it is to be a soldadera? In other words, does he use the image/icon in such a way that it comes across as him "being" on the inside or from the inside? Or does he use it simply as an image influenced by? Does he speak about its use as expert despite being from the outside, a know-it-all? Or does he say, instead, "I was going through some images of women warriors and I came across this one of a Mexican woman revolutionary and I thought, 'Cool, just what I was looking for'"?

Now, there is also this other thing: the misuse or misrepresentation of a culture, which is not appropriation but another sort of mistake that an author or illustrator will make. And again, we have to deal with his/her intent. Usually, the intent is innocent: he/she wants to be more representative, more diverse in the work. It's a two-edged sword. Do it, do it wrong, pay for it. Don't do it, the writer is bigoted. These these are not evil people we're dealing with in the publishing industry, though. They just don't know, or don't realize that they don't know. I'm among them. I've gotten called at least once, before publication, I made the correction, and it didn't harm the integrity of the story nor of my work as a writer (thanks, David Bowles for speaking up that one time). To do it well, I need to check with others in the know if I'm going to write a Black character into my story, or a First Nations character. Though I do believe that there are universal elements to our stories--that we all know great happiness and great sadness, that we all experience love and hate, that we feel anger and joy--I have discovered that we don't all express them or experience them in the same ways. And sometimes, a culture's expression or experience is distinct, and I need to honor it. For me to write that into one of my stories without really understanding it means, at best, I'm doing it superficially, at worst, I'm doing it wrong, and the one who suffers is the younger and more impressionable reader from within that culture; the other from without, too, suffers.

I do think we have allowed ourselves to become too soft, in need of safe spaces too quickly over the years. We are too sensitive about almost everything. That a writer elects not to make reference to another's culture because we're likely to get called on it is censorship of the worst kind: self-censorship. I choose not to write something because I'm scared that there will be pushback is a bad thing. I'm not saying we need to lighten up, let things go, let writers and illustrators off the hook. But we cannot take offense at everything like this woman on Facebook did with this image of Leia and the soldadera or with me disagreeing with her. This diminishes the more serious and legitimate work that other folks are doing.

One last thing: these books are out there: those that abuse or exploit a culture, and those that misrepresent. I would recommend to fellow teachers to, on occasion, use them with our children in the classroom as opposed to avoid them. Instead of shielding our children at every turn, we need to teach them how to distinguish between a book that gets it right and one that fails miserably. We need to teach them how to be strong that way, to look at a text critically and how to be critical of it. We need to teach them to stand up for and against these major errors in curriculum. More importantly, we'd be teaching them to become independent and strong. To themselves know when and how to do so. That's what I want for my own kids. And for others' too.
at January 05, 2017 No comments:

I've met Michael a few times over the years, from when he was a little kid to more recently at the book festival his mom put together in south Texas (which is an awesome event and as long as I'm welcome, and I can travel down, I am SO there!). This time was special meeting him again: he's older, he loves books (he better: his mom's one of the best librarians and reader ever!), and he doesn't shy away from talking books, or talking to adults about books (which will be a gift to his ELAR teachers and lit professors), so, when I first arrived in Edinburg late evening (9ish?) gathered in the area where they serve breakfast was a bunch of writers and librarians, and among the bunch was Michael, who'd set himself apart somewhat, off to a corner, reading none other than The Jumping Tree. He was close to finishing when I said hello to him. "Tell me what you think when you're done," I might have added. I've met plenty of readers over the years who are excited to talk to a writer of a book they've read, and that's cool. Their teachers always say it's a great thing for them to meet the author. I wonder, do these readers know how awesome it is to meet our readers! And, do they know we're just as anxious to meet them as they us? And cooler yet when we get some good one-on-one time. And with readers (I mean, the engaged ones, right, who don't need to be coerced into the act of reading but do it for the goosebumps, for the edge-of-their-seats feeling, for the laughter, the near-tears, etc.), man, what a moment for a writer because we get to really and truly discuss our work and their work in reading. Michael, you call my book one of your faves for the year. You're one of my favorite readers in the world over a lifetime!

Beverly Slapin reviews Mystery Bigger than Big (MBTB) on her blog.
at August 22, 2016 No comments:

Take a listen to my interview with Houston Public Media's Eric Ladau on the subject of Unaccompanied Minor Children and my latest book, the 4th installment of my bilingual Mickey Rangel mystery series, A Mystery Bigger than Big.

Click here to listen to the Interview.
at August 22, 2016 No comments:

A pivotal game for LBK FC 06, the boys are tied and have to go to Penalty Kicks (PKs). Mikah's at the goal and for all intents and purposes, he does a great job. He stopped all but two shots. There is a question about one of the shots our boys took: does it go in or does it not?

The ref didn't score it as a goal, and so the boys lost this game that would've given them a shot at the championship; they are actually the team that scored the most goals, and except for this one PK or the missed call, they would've played for 1st on Monday AM. They came in a respectable 3rd place, though. Congrats to them and Coach Adams!

So yeah, I got news from the folks over at Latin@s in Kid Lit that after two days my blog post "Forgive Me My Bluntness" had got 1,400 views (of which, I must admit, a bunch belong to me, but still).

Among all the 1,400 were a few notables: noted multiculturalist Sonia Nieto emailed me her response, and then I got a Tweet from Cindy Rodriguez in which she linked to Nikki Grimes' personal blog in which she posted the following: Grimes' "Mr. Cellophane," an essay on diversity in kids lit.

Do I have to say, I'm thrown for a loop, and am super honored that they read my piece, but how cool that another several hundred read it too.
at September 12, 2014 No comments:

It's Been A While

René Saldaña, Jr.
Originally from Nuevo Peñitas in South Texas (a suburb of Peñitas Viejo), I now live in Lubbock, TX, with my wife Tina; our sons, Lukas, Mikah, and Jakob, and our daughter Kalyn; our cats Cotton, Gordon, Grayson, Jet, and Raisin; and our dogs Sadie and Chito; where I teach). 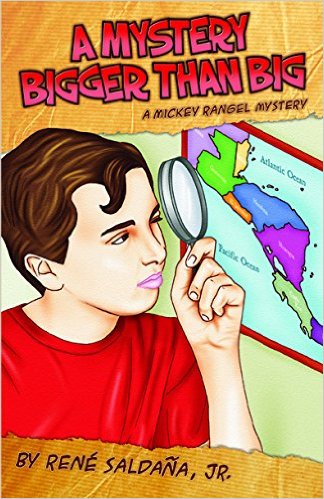 Heartbeat of the Soul of the World: New and Selected Stories 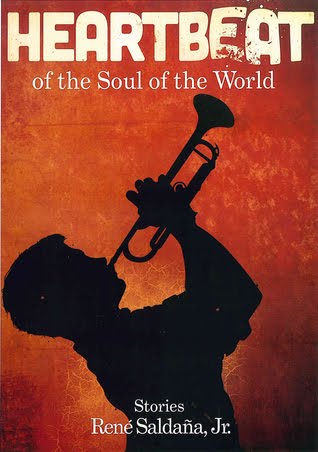 My second collection of short fiction.

Mystery of the Mischievous Marker: A Mickey Rangel Mystery 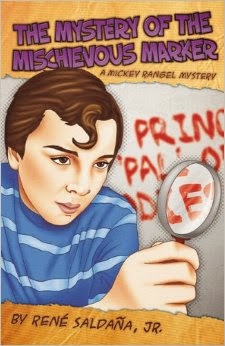 "Saldaña's prose is peppy, and his mystery, while quickly solved, hammers home a solid grammar lesson as a bonus." Kirkus Reviews

Dancing with the Devil and Other Tales from Beyond 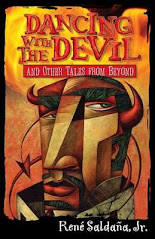 VOYA writes, "The stories range from genuinely frightening to gloriously gruesome, but all of them are memorable."

Kirkus Reviews calls it a "brisk novella," which it's not, but I'll take it. I mean, it's not a novella, it's a chapter book, a bilingual one at that; the 2nd installment in the Mickey Rangel mystery series.

Alicia Sondhi in ForeWord Magazine: "A poignant, brief novel that leaves a lasting impression, A Good Long Way is a meaningful read for teens by an author with a deep understanding of the struggles and rewards of growing up."

The Case of the Pen Gone Missing: A Mickey Rangel Mystery (Piñata Books, 2009)

This book "...will engage intermediate readers in both languages, English and Spanish, and offers multiple possibilities for school projects, group discussions and read-aloud sessions." --Kirkus Reviews ***NOW OUT!!!*** (to order, click on cover above)

My second book, a collection of short fiction, also aimed at the YA market.